When is the last time you watched the sky revolve around us?

The fastest space craft (and fastest man-made object in history), Juno, will slingshot around Earth on its way to Jupiter, eventually reaching a speed of 165,000 m/h. The NASA space shuttle reaches speeds of 17,000 m/h (27,000 km/h).

Though we sit in this coordinated maelstrom, we can still understand all of space and time on the largest scales. But, to do so, we must consider it statistically, on the whole, at great breadth and as a collection – not merely the sum of disconnected parts or separate events.

All across the universe, there are supernovae – exploding stars that blink in a cataclysmic, cosmically infinitesimal moment. Quasars are small regions that surround the supermassive black holes at the centers of galaxies that flash on and off on the timescales of hours to months. Each galaxy in the universe is creating some dimple in space-time due to its mass. Imagine a vast expanse of sand dunes: all light passing by these galaxies must traverse through it, resulting in distorted images by the time they get to us.

These are just some of the events that go on constantly around us, without regard for our existence, as we spin round and round, imagining a static quilt of stars turning about us. And they are just some of the celestial targets that will tell us more about how fast the universe is expanding.

To better understand these events, and the acceleration of spacetime, we wait for the targets to be at a place in the sky when we can see them – when the sun is down and this part of Earth is pointed in their direction. Our targets come from a large swath of sky, one-eighth of the celestial sphere. And across this expanse, we will obtain a uniform sample of targets. The uniformity – homogeneity or constancy – is crucial: we must observe all galaxies brighter than a certain amount, and within a certain distance to have a clean, uniform sample. Otherwise, variations in that information could be misconstrued, or at best they could muddy our measurement of dark energy.

Building the collection starts with amassing a set of deep images of the sky: these are but snapshots of long-gone eons, and they are the first step in our process of discovery. From the images, we distill vast catalogs of celestial bodies – galaxies, stars, motes and seas of hot gas and dust – an accounting of what the universe has so far created. This catalog can be further distilled when studied as a whole. The final concentrate is a small set of numbers that summarizes the fate of our universe: a measurement of the strength of dark energy.

Our spaceship Earth is a pebble in the swirling cosmic sea around us. We watch it as if we are separate, sometimes forgetting we come from it. As we look up from within our snowglobe on a mountaintop in the Chilean Andes, it becomes easier to remember that we are a conduit between the finite and the infinite.

Good night, and keep looking up.
Det. B. Nord

Light-years Away, Right at Home

As the Galaxy sets behind the Blanco telescope, our home away from home, we are reminded of where we really are. Earth resides in a mere village of planets, one of many in a city of stars – our Milky Way galaxy – which, as these detectives see it, is our true home.

But it is the distant stars and galaxies, just like those we call home, that betray patterns in our cosmos.

We operate in the dark of night to find as many as we can, as carefully as we can. We track locations, movements, interactions, explosions and lifetimes of millions of individuals. Only these clues in aggregate (for the most part), will lead us down a starlit path to an understanding of our universe’s greatest tug of war: that which is between the pull of gravity and the accelerating expansion of dark energy.

The detectives have gone back to work for Season 2 of observing and combing the logs of photons as they stream into the trap we’ve set, the Dark Energy Camera (DECam). In the coming months, we’re turning these streams into nuggets of knowledge, the first puzzle pieces to be revealed by the Dark Energy Survey (@theDESurvey).

And ultimately this knowledge brings us back home, to understanding our place in the cosmos.

I’m here now at the Blanco, writing this as we prepare for our third night of observations and tracking in Season 2 of DES, with bags under our eyes, coffee mugs in hand, watching the fires in the sky.

If you run into us where the electrons roam (FB, Twitter, Reddit, etc.), don’t be afraid of the dark – get in touch. We’ll report every two weeks (and occasionally more), and we’ll have more detectives and more ways to tell the stories.

Today, there’s an announcement about the beginning of Season 2, along with a spate of videos and images about the team of detectives, the location and the machine we’ve built.

Time to Meet the Neighbors! 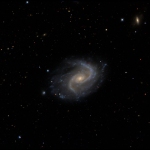 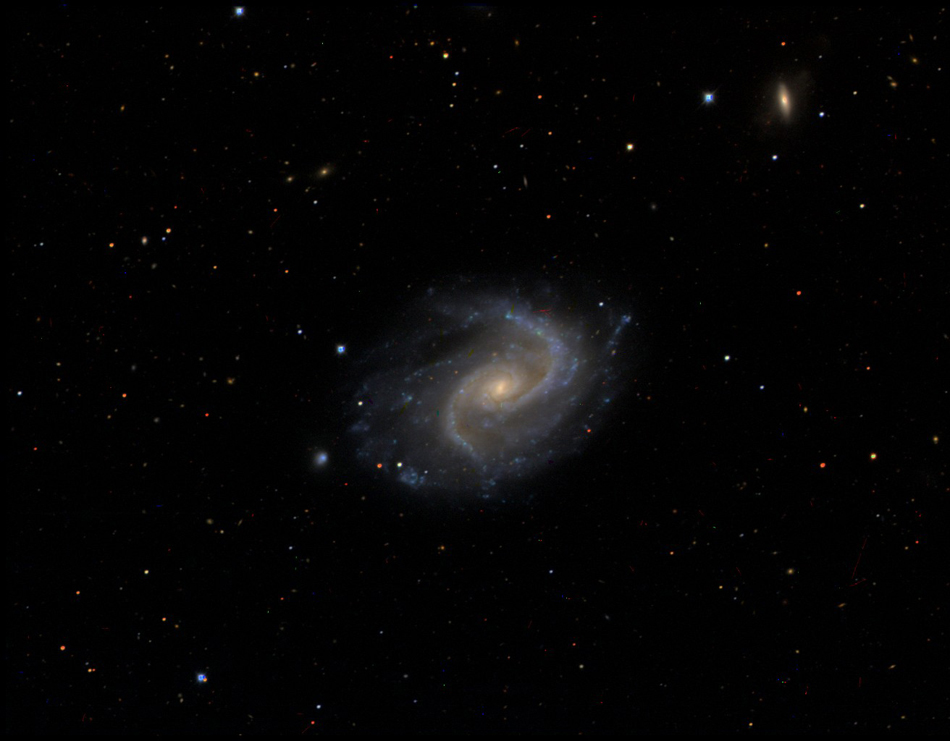 Spiral Galaxy NGC 0895 was discovered by William Herschel in 1785. Herschel created the first maps of the Milky Way galaxy by observing and drawing the stars. Herschel also saw galaxies outside the Milky Way, but he didn’t know what they were, so he only referred to them generically as nebulae. That was the common term at the time for diffuse, extended objects – including actual nebulae, which are the gaseous remains of exploded stars.

We can tell how many stars are forming by how blue the galaxy appears through the camera lens. Blue galaxies contain many young, newly formed stars. The golden object in the upper right is a redder galaxy, which has many more older red stars, and fewer still forming.

This image was taken with the Dark Energy Camera, and shows us this galaxy in sharper detail than we have ever seen it. Check back here every Monday for another image and another story from the Dark Detectives at DES. 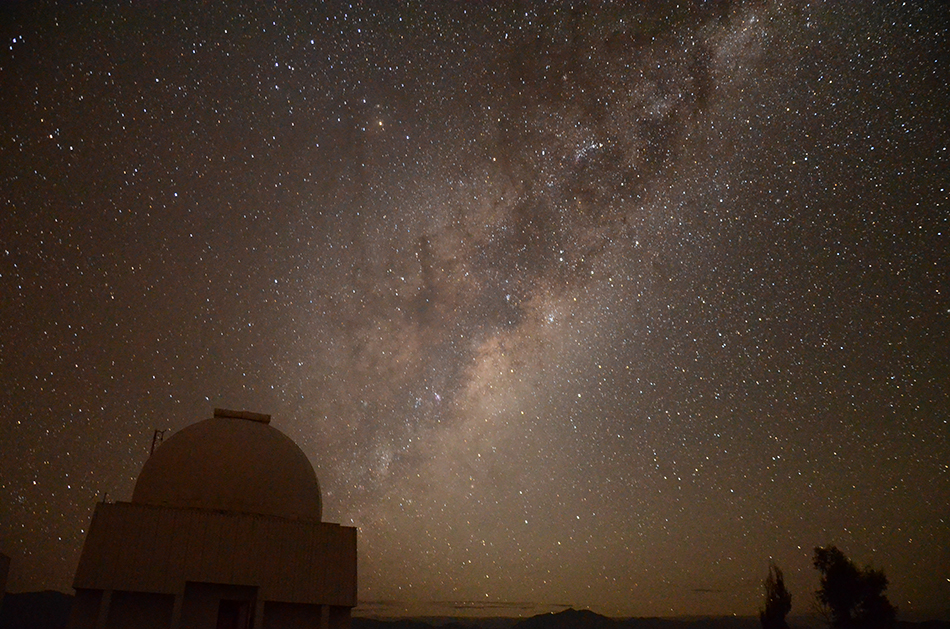 What’s it like to look into the eye of our galaxy? Facing away from the Blanco Dome, to the north, we can see a clumpy, disc-like cloud spread across the sky. Our solar system resides in the disc of the spiral Milky Way, and when we look out to the cosmos in this direction of the sky, we’re staring into the plane of our home galaxy.

The Dark Energy Survey will observe and study hundreds of millions of galaxies, just like our Milky Way.

Only at the Cerro Tololo Inter-American Observatory in Chile (and high, dry places like it) can we see such detail in the night sky so clearly. Astronomer and amateur photographer Ricardo Demarco (and community user of the Dark Energy Camera) took this image, capturing the edge of the Milky Way with just a single 30-second exposure with his own camera.