Moonlight illuminates the top-most plateau of the Cerro Tololo Inter-American Observatory (CTIO), near La Serena, Chile—and with it, the Blanco 4-meter telescope dome (middle) that houses the Dark Energy Camera (DECam). Directly above the dome, we see Earth’s south pole, about which the world turns and our celestial sphere rotates, giving us this vortex of starlight.  Peering out of our little blue dot, our little snow globe, we also look into the depths of space and into our universe’s past. 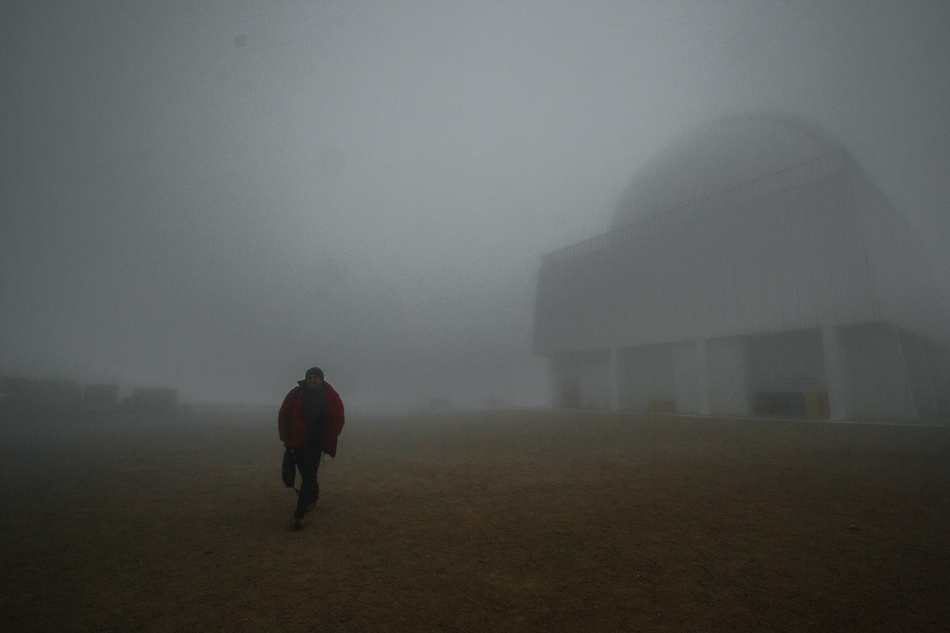 We awoke just after two in the afternoon to the eye-itching grogginess that inevitably follows a long night of observing. The afternoon light just barely peeked through the few windows in our dormitory rooms, located more than 60 meters (about 120 feet) below the Blanco Telescope, where we do our nightly work for the Dark Energy Survey (DES).

As we headed to the lunch-flavored breakfast in the cafeteria we spotted a procession of dark clouds to the southeast. To our dismay, the prevailing winds appeared to be carrying them toward us, and toward the Blanco.

During ‘breakfast,’ comprised of tasty fresh vegetables and sausage, we discussed last night’s observations and logistics, as well as plans for the upcoming night, including speculation about the impact of the potentially turbulent weather.

Wet and tumultuous skies scatter the light from distant galaxies and stars that were otherwise on straight paths toward the telescope. This can cause a blurring of images. For telescopes situated on Earth, the higher the mountain-top site, the better the chances of avoiding atmospheric disruptions. The Cerro Tololo Inter-American Observatory resides at about 2200 meters (or 7200 feet) and it enjoys clear, dry skies the vast majority of the time.

Occasionally, mother nature reminds us of her unpredictability and how precious each photon is. With only eight hours of night out of every 24, we need all the darkness we can get. On this afternoon in the early Chilean spring season, our hopes would succumb to the fickle weather. After lunch, we left the cafeteria and looked up to find that a low-flying cloud had come to rest on the mountain peak, enveloping the Blanco. This night, there would be no sky observations, and no photons would break through this wet, gray blanket.

The picture above is taken looking outward from the main door to the control room of the Blanco. The telescope operator, Claudio Aguilera from La Serena, Chile, arrives for the night’s (uneventful) work.

What’s it like to look into the eye of our galaxy? Facing away from the Blanco Dome, to the north, we can see a clumpy, disc-like cloud spread across the sky. Our solar system resides in the disc of the spiral Milky Way, and when we look out to the cosmos in this direction of the sky, we’re staring into the plane of our home galaxy.

The Dark Energy Survey will observe and study hundreds of millions of galaxies, just like our Milky Way.

Only at the Cerro Tololo Inter-American Observatory in Chile (and high, dry places like it) can we see such detail in the night sky so clearly. Astronomer and amateur photographer Ricardo Demarco (and community user of the Dark Energy Camera) took this image, capturing the edge of the Milky Way with just a single 30-second exposure with his own camera.