The best of the best 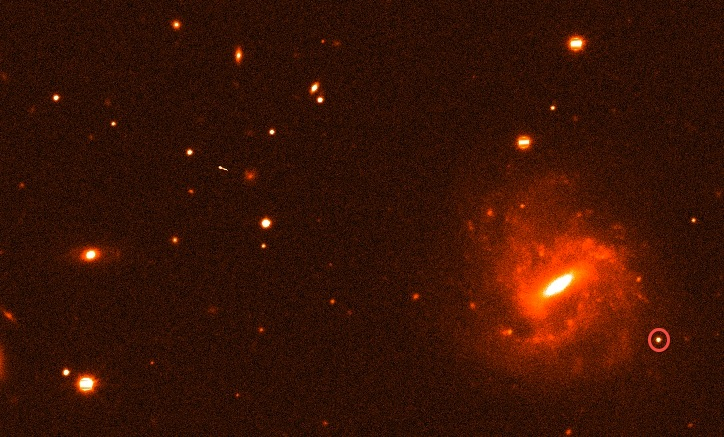 Scroll down through these Dark Energy Detectives case files, and you’ll see beautiful images of galaxies taken with the Dark Energy Camera. While they come in different shapes, sizes, and colors, these galaxies all have one thing in common: they’re all speeding away from our own Milky Way, at speeds of tens to hundreds of millions of miles per hour. The Universe is expanding, something we’ve known for nearly 90 years.

If we could track the speeds of each of these galaxies over time, what would we find: would they stay the same, speed up, or slow down? Since the Milky Way’s gravity tugs on them, Isaac Newton would have told us they would slow down over time, just as an apple thrown straight up in the air slows down (and eventually falls) due to the pull of Earth’s gravity. But Isaac would have been wrong, the galaxies are getting faster, not slower. The expansion of the Universe is speeding up, something we’ve known for only 17 years. The 300 detectives of the Dark Energy Survey (DES) are embarked on a five-year mission to understand why this is happening. In this quest, they’re carrying out the largest survey of the cosmos ever undertaken.

While these goals sound lofty and profound (and they are), at its core DES is really about taking pictures. Lots of them. On a typical night, DES detectives snap about 250 photos of the sky. After five years, we’ll have over 80,000 photos in our album. For each snapshot, the camera shutter is kept open for about a minute and a half to let in enough light from distant galaxies. On each image, you can count about 80,000 galaxies. When we put them all together, and accounting for the fact that we’ll snap each part of the sky about 50 times, that adds up to pictures of about 200 million galaxies, give or take.

One of the ways we’ll learn about dark energy—the putative stuff causing the universe to speed up—is by measuring the shapes of those 200 million galaxies very precisely and comparing them to each other. Imagine taking photos of 200 million people, roughly one out of every 35 people on Earth, to learn about the diversity of the human race. To gain the most information about our species, you will want all of your photos to be taken by a professional photographer under identical conditions conducive to getting the best image: good lighting, camera perfectly in focus, no jiggling of the camera or movement of your human subject during the exposure, etc. But inevitably, with 200 million photos, given the vagaries of people and circumstance, some photos will come out better than others. In some, the subject may be a bit blurred. In others, there may be too much or too little background light to see the person clearly.

In the Dark Energy Survey, we’re striving to get the best, clearest snapshots of these 200 million galaxies that we can. As professional photographers of the night sky (a.k.a. astronomers), we’re using the best equipment there is—the Dark Energy Camera, which we built ourselves—to do the job. The camera has 570 Megapixels and 5 large lenses. It has a sophisticated auto-focus mechanism to always give us the crispest images possible.

No need for a flash, since galaxies burn with the light of billions of suns.

But as with human photography, Nature doesn’t always cooperate. The Dark Energy Camera is mounted on the Blanco telescope, located at Cerro Tololo in the Chilean Andes. This site has mostly very clear nights, but occasionally, clouds roll by. Turbulence in the atmosphere, which makes stars twinkle, leads to a slight blurring of the images of stars and galaxies, even if the camera is in perfect focus. The camera works by taking pictures of all the light that reflects off the 4-meter-diameter mirror of the telescope. If a cold front moves through, making the air in the telescope dome cooler than the 15-ton mirror, plumes of hot air rising off the mirror lead to blurry images. The sharpest images are those taken straight overhead—the further away from straight up that we point the telescope, the more atmosphere the light has to pass through, again increasing the blurring; since our survey covers a large swath of the sky, we cannot always point straight up. Strong wind blowing in through the open slit of the dome can cause the telescope to sway slightly during an exposure, also blurring the picture. Since the Earth rotates around its axis, during an exposure the massive telescope must compensate by continuously, very smoothly moving to stay precisely locked on to its target; any deviation in its motion will—you guessed it—blur the image.

For all these reasons and others, the quality of the DES images varies. On some nights, conditions conspire to give us very crisp images. On others, the images are a bit more blurred than we’d like, making it harder to measure the shapes of those distant galaxies. If an image is too blurred, we don’t include it in the album: we’ll come back another night to take a photo of those particular galaxies. So far, about 80% of the photos we’ve taken have been good enough to keep.

Most nights during our observing season, we have three detectives operating the camera; each of us is there for about a week, and in the course of a season about 50 detectives rotate through, taking their “shifts.” On the night of January 27, 2015, I was in the middle of my week-long observing shift at the telescope with two fellow detectives, Yuanyuan Zhang from the University of Michigan and Andrew Nadolski from the University of Illinois at Urbana-Champaign. That night, Andrew was manning the camera, I was checking the quality of the images as they were taken, and Yuanyuan was our boss.

The conditions that night were outstanding. Although it was a bit humid, the atmosphere was extremely smooth and stable. We were mainly taking pictures using filters that let in only very red or near-infrared light. This was because the moon was up, and the moon is actually quite blue: red filters block most of the moonlight that scatters off the atmosphere from entering the camera, enabling us to see red galaxies against the dark night sky. In his famous photograph “Monolith, the Face of Half Dome” taken in Yosemite National Park, Ansel Adams used a red (but not infrared) filter to darken the blue daytime sky to dramatic effect.

At 12:28 am local time, we snapped exposure number 403841, using a near-infrared filter called the z-band. The z-band is so red that it’s beyond the visible spectrum that can be seen by the human eye, but digital cameras, and the Dark Energy Camera in particular, are very sensitive to near-infrared light. Computers at the telescope analyze each image right after it’s taken and display the results on a bank of monitors, so we can tell whether we’re taking data that passes muster for our cosmic album. When 403841 came out, the screen showed that it was an exceptionally sharp image. Further analysis convinced us that it was in fact the sharpest image of the roughly 35,000 snapshots that DES has taken so far, going back two years to the beginning of the survey.

The image was so sharp that the light from each star was spread out over only about 0.6 seconds of arc or about 0.00017 degrees. For comparison, that’s how big a crater a kilometer across on the surface of the moon looks from Earth. It’s also the angular size of a typical human hair seen at a distance of about 100 feet.

A small portion of the 403841 image is shown above in false color, showing a great spiral galaxy plus a number of smaller, fainter galaxies and a few bright stars in our own Milky Way. The star inside the red circle at the lower right of the image has its light spread out over only 0.6 arc seconds. While not as pretty as the color images of galaxies in other DED case files, this is closer to what a raw image directly from the camera looks like. The raw DES digital images are sent for processing to the National Center for Supercomputing Applications in Urbana-Champaign, Illinois (if you’re under 40, ask your parents if they remember sending film out for processing), to make them science-ready for our fellow DES detectives.

In DES, we keep a “bragging rights” web page of the sharpest images we have taken in each of the five filters we use. Our friend 403841 is now prominently displayed there—the best of the best. But the best thing about records is that they’re made to be broken.

–Det. Josh Frieman [Fermilab and the University of Chicago]

N.B.: we just completed a Reddit AMA on Friday, Jan 30, where we discussed the cases and evidence for dark energy and dark matter.

This entry was posted on February 2, 2015 by darkenergydetectives. It was filed under DECam Images, English, Ingles .

What do you think about the darkness? Cancel reply