A Family of Galaxies 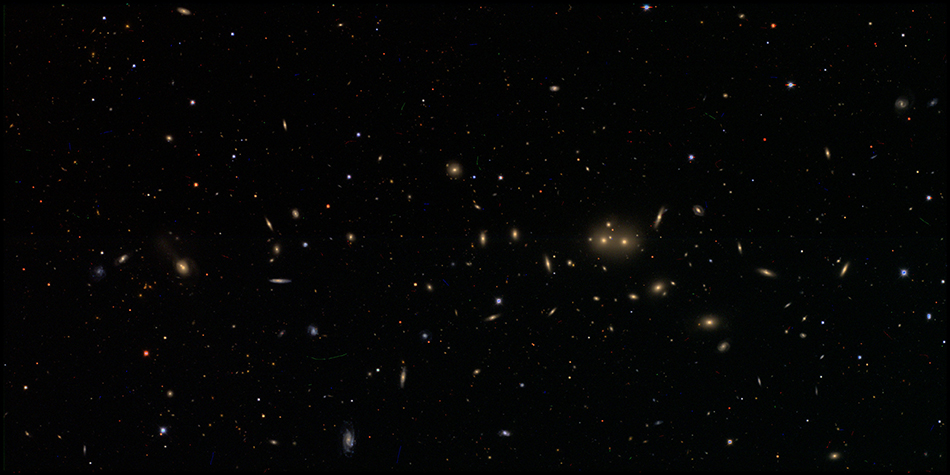 In a sea of darkness, innumerable points of light come into focus. While there are some stars visible here, nearly all the red, blue and yellow objects are galaxies. In the lower left and upper right, some of the blue galaxies show off their beautiful spirals (similar to our own Milky Way). The blue color and the clear structures (bars, spiral arms, dense clouds) within these galaxies betray their basic nature: newly birthed stars emanate the blue color and the very existence of the structures means that these galaxies live in a pristine environment where gravity is the dominant force acting to clump things together. All in all, these spiral galaxies are thus relatively young.

In stark contrast, the yellower and redder galaxies have stopped forming new stars and are often referred to as ‘red and dead.’ These galaxies have endured turbulent lives: having been rocked by collisions with other galaxies, they are too hot to form stars. What’s more, all the work that gravity did to make structures within has been washed away leaving just bright cores, diffuse outskirts and elliptical shapes (and so they are named ellipticals).

Several elliptical galaxies appear clustered (just left of center of the image). These galaxies are gravitationally bound as a group or cluster. This cluster has 43 galaxies (can you find them all?), and it was one of the clusters discovered by George Abell and collaborators during the 1970’s and 80’s as part of the Southern Sky Abell Catalog (published posthumously in 1989).  Amazingly, these clusters were discovered and measured with the human eye using photographic plates, rather than the electronics that the Dark Energy Survey uses, and they are part of the earliest comprehensive collection of optically observed clusters started by George Abell in 1958.

What has dark energy done to this cluster?  Galaxies within a cluster gravitate toward one another, because galaxies have mass.  In contrast, dark energy stretches the fabric of space-time, upon which galaxies reside.  Thus, dark energy directly opposes gravity.  Dark energy can affect larger objects like clusters of galaxies, but isn’t strong enough to pull apart stars, solar systems or galaxies (where gravity is much stronger).

If gravity serves to pull massive objects (like galaxies) toward one another, then dark energy will pull them away from each other. There are millions and millions of families of galaxies across the universe, and dark energy will make them smaller.

What’s more, you’ll find small colored streaks randomly dispersed throughout the image. These come from very high-energy (fast!) cosmic rays that hit the camera’s detectors but briefly, leaving small imprints in the image. These cosmic ray streaks are just one type of artifact that have to be cleaned out of the images before cosmological questions can be asked. In future posts, we’ll discuss more about the data reduction process.

What other kinds of cosmological structures do you think will be affected by dark energy? Why is gravity stronger than dark energy amidst smaller structures?
Written by: Det. B. Nord, PhD [Fermi National Accelerator Laboratory]
Image Credit: DECam via Det. Erin Sheldon, PhD [Brookhaven National Laboratory]
Email us at darkenergydetectives@gmail.com if you have clues, questions or comments about anything cosmology.

This entry was posted on May 6, 2013 by darkenergydetectives. It was filed under Dark Energy Photographs, DECam Images, English, Galaxy Cluster, Ingles and was tagged with Abell Catalog, cosmic ray, elliptical galaxies.